Imagine a time when $12 could book you a week’s stay in a furnished room at the elegant ocean front Harbor Inn at Stone Harbor. At the beginning of the 20th Century, Stone Harbor offered many options for lodging accommodations. As the emerging “New Stone Harbor” took shape, a need arose for hotels and apartment houses. They helped create a resort community that continues to this day being called “The Seashore At Its Best.”

This account will dwell on Stone Harbor’s first permanent structure. It was the Hotel Abbotsford Inn, which opened for business on July 4, 1892, at 83rd Street facing and close to the ocean. By 1907 the South Jersey Realty Company/Stone Harbor Improvement Company assumed ownership, renamed it Harbor Inn and conducted all hotel operations. This became an increasingly popular hostelry when many guests and potential investors from Philadelphia and other places were brought to Stone Harbor and entertained by the Risley brothers on the Company’s Free Inspection Trips hopefully leading to the purchase of bonds and the building of houses on undeveloped lots.

Back on June 25, 1910, The Philadelphia Inquirer newspaper on page 14 ran a small advertisement which stated the following: “The Harbor Inn, directly on the

The first post card view dated Jan. 18, 1918 shown here depicts the new Harbor Inn in all its splendor hosting many guests assembled for this striking photo opportunity. The group of men in dark uniforms standing on the ground in the front appear to possibly be a band holding their musical instruments for this special occasion. Many people assembled and standing on the large entrance stairway seem to be dressed in their summer finery. This hotel open all the year was under the management of Neiman and Eisenhuth, formerly of the Clarendon at Atlantic City.

Hotel guests at the Harbor Inn were soon praising the hotel stating that the first thing that strikes the visitor is the “size, proportions and elegance”. People came from the cities and the beaches above to see this new and complete seaside hotel and were always surprised, for it was planned on a different scale and was utterly unlike any of the seaside hotels in this part of the New Jersey coast. Though not so large as the hotels of Cape May

nor like those at Atlantic City, it was as elegant as any at either place and had characteristics that were quite its own. The Harbor Inn was purported to have all the most modern conveniences and it was considered up to date in every way, but at the same time there was a compactness, a cosiness and certain tricks of arrangement that suggested more a pleasant club house or a private establishment than a house of public accommodation and entertainment. Its situation could not be better – midway between the railroad and the ocean and not two minutes walk from either. The hotel was five stories high with a front of nearly 80 feet on the ocean.

We have learned that the basement provided lots of conveniences including bunks for fishermen and guides who may have to stay over night, store rooms for guns, fishing tackle and other paraphernalia and a refreshment and smoking room as well as rooms where some of the visitors had private lockers of their own.

The entire first floor was made up of rooms for general use – a large and social hall for large gatherings, a parlor handsomely carpeted and furnished most artistically, a men’s reading room, a quaint conversation and writing room for ladies and one of the most cheerful dining rooms imaginable. It was said that no one who dines there will be disappointed. What a great way to treat

guests and establish a strong brand by building a fine reputation for excellent service.

The rooms on all but the topmost story were larger than in most summer hotels and it was on this account that that the hotel only accommodated about seventy-five people, while it was as large as some other hotels that accommodated a greater number. It would not be long before the Harbor Inn became known especially for catering to families and that would indeed be a big draw for success over the coming years.

The second and third post card images depict interior views of two main rooms at the Harbor Inn. One of these cards was postmarked on JUN 6, 1908. The captions for these two images state “The Roomy Parlor of the Harbor Inn” and “The Dining Room of the Harbor Inn, Stone Harbor, N.J.” Both these images will enhance the descriptions provided above.

“The Roomy Parlor” seen in this interior view of the Harbor Inn features the flaring horn of a hand-cranked gramophone for playing records and listening to music, numerous sitting and rocking chairs, a cosy fireplace, floor lamps and ceiling gas lamps for lighting and a writing desk.

each with tablecloths ready for fine dining. Shall we say “Bon appetit!”

The fourth post card dated 1924 with the caption “Harbor Inn, First Avenue” shows this hotel once of grandeur, now in very shabby condition. Unfortunately, by the latter 1920s, the Harbor Inn had fallen into a state of neglect and disrepair. Close examination of this last post card view sadly illustrates the Harbor Inn in its derelict state prior to its being demolished. Unlike the first image in this array, this particular view shows the hotel in need of paint, without its distinctive cupola-like roof over the 4th-floor open-air observation deck and the usual well-maintained grounds have been seriously neglected. Personally, I am however a bit perplexed as to why someone was willing to pay the S.K. Simon & Co. to produce this particular image and then offer this very post card image for sale showing the Harbor Inn in such a run down state. I am really not clear on what the thinking was that motivated that little venture.

In any event, it might be said that the demolition of the Harbor Inn marked the end of an era. But we should also be reminded that at the same time another hotel built in 1912 called the Shelter Haven Hotel at 96th Street and Third Avenue was establishing itself and making its mark in Stone Harbor. However, I am certain that the charm and both the level and the quality of service provided by the Harbor Inn would not be

duplicated by any of the newer hotel establishments that would come to Stone Harbor over time. Perhaps as we look back in time, we would be reminded of the lyrics to that once popular song by Mary Hopkin, “Those were the days my friend…”! 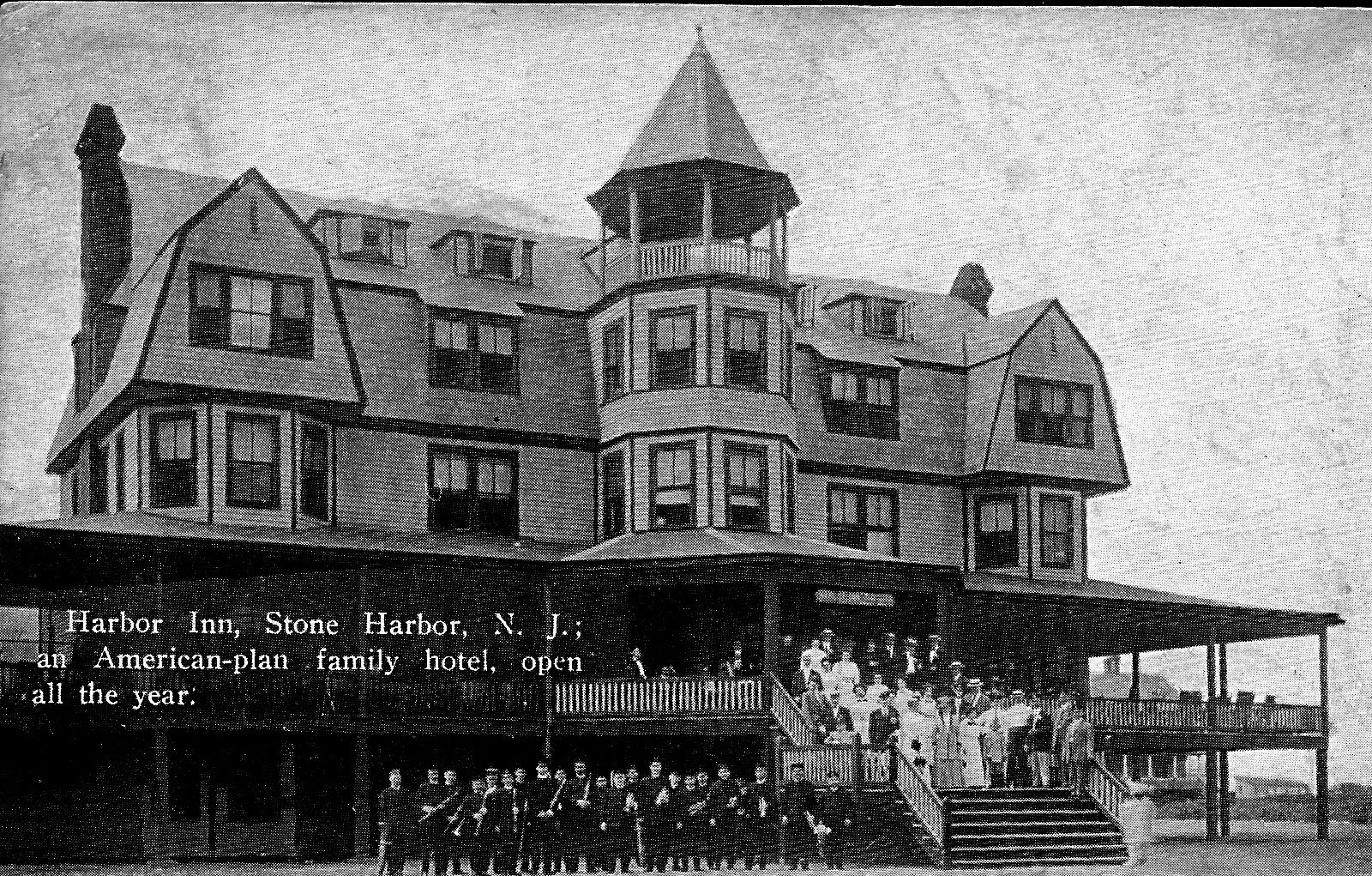 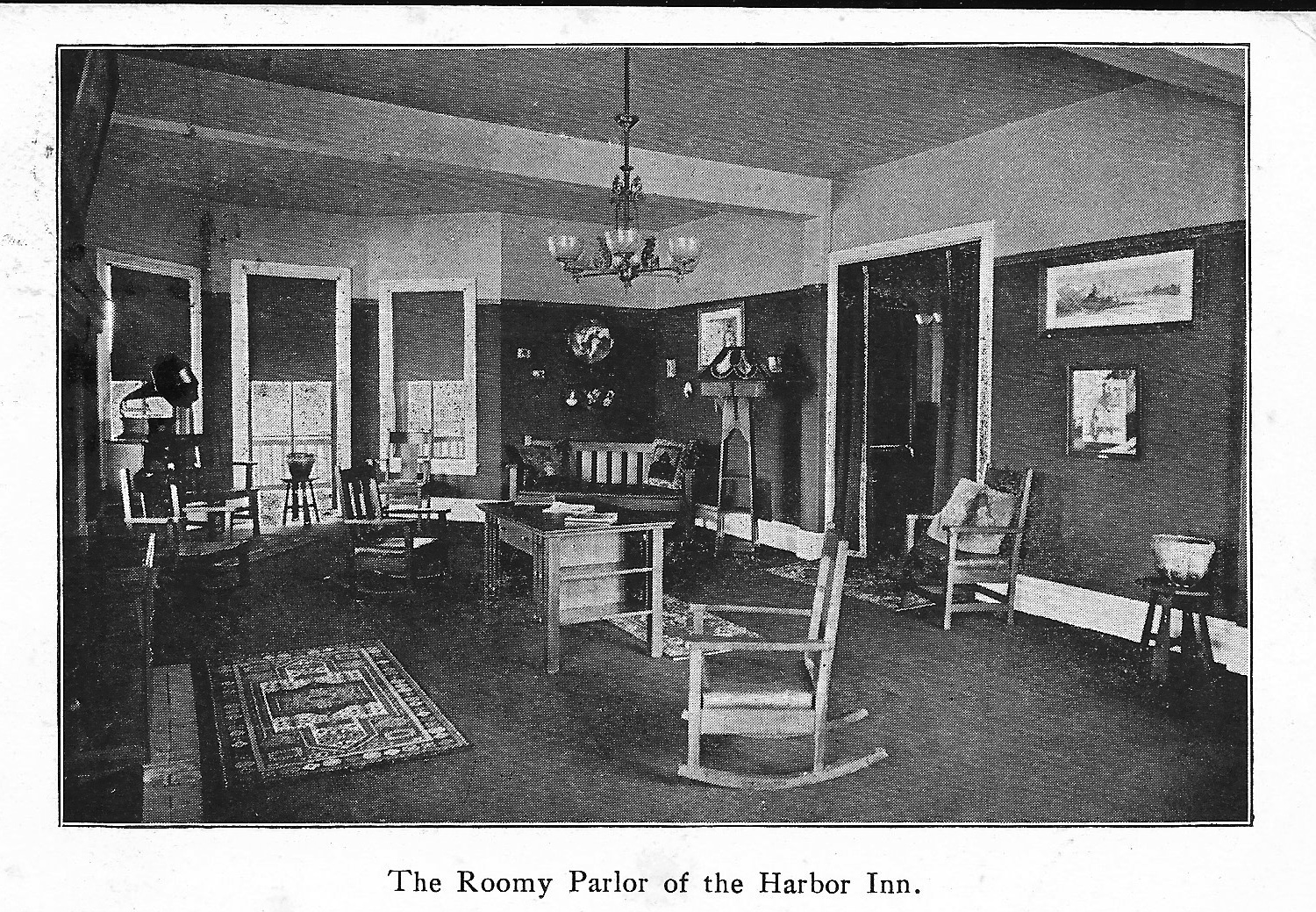 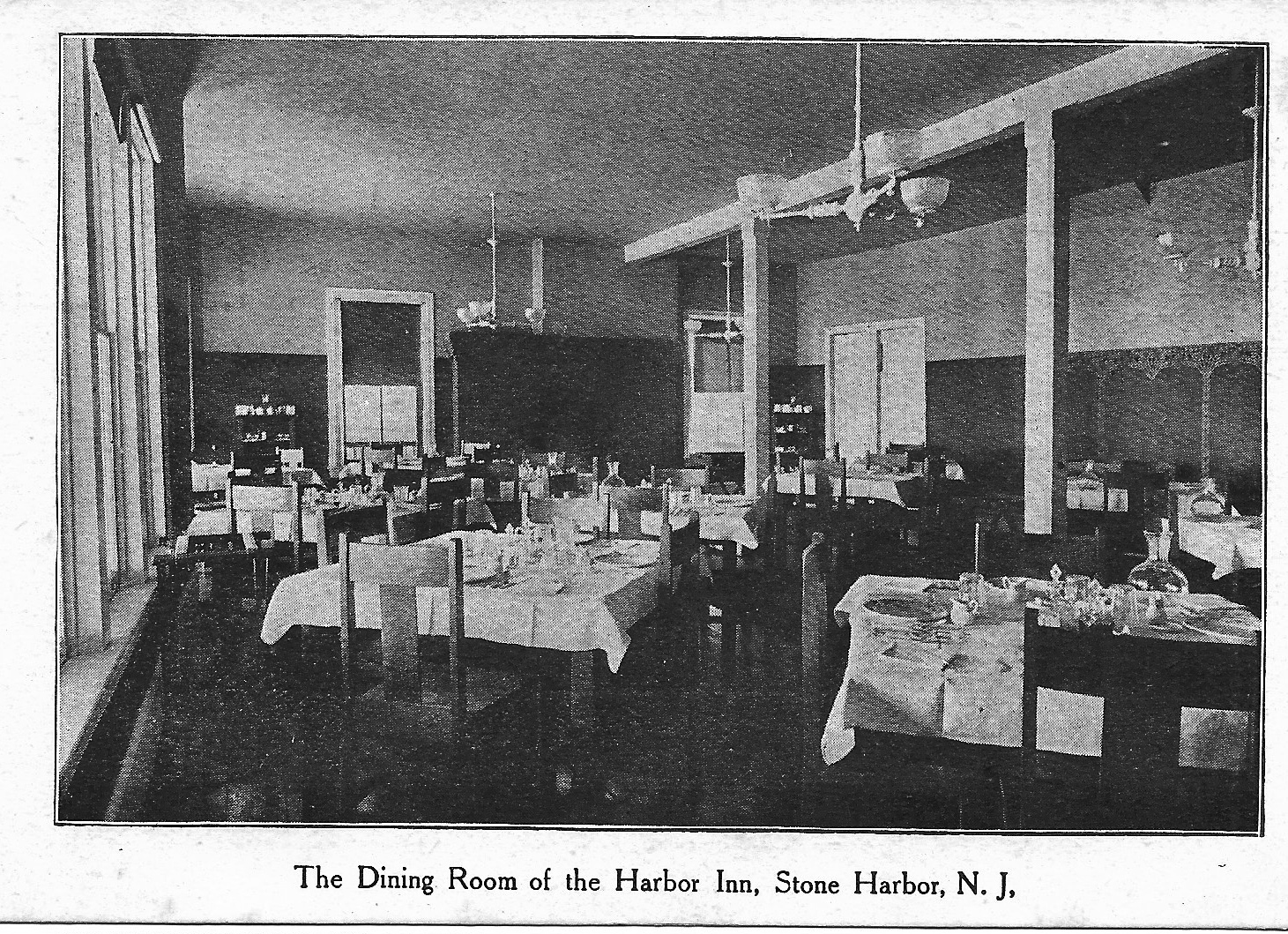 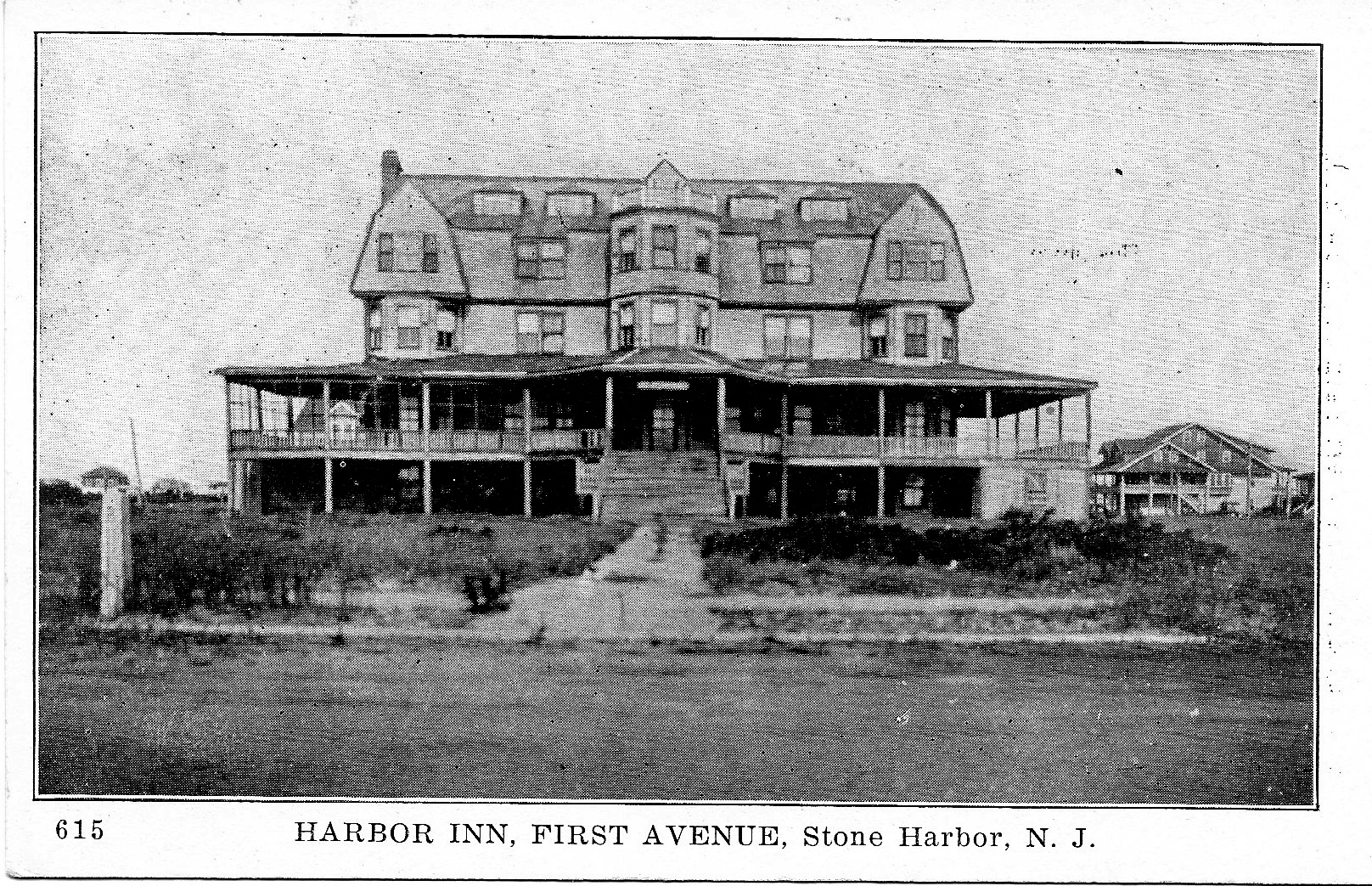