Just because the post card states “Stone Harbor, N.J.” or “Greetings From Stone Harbor, N.J.,” it does not necessarily mean that the scene depicted is indeed related to this particular seashore resort.  This short article will present 11 examples of Stone Harbor post cards that in all probability are not really post cards showing any actual scenes in Stone Harbor.

Sometimes publishers of post cards have printed a particular scene that is rather general but applicable to any number of other locations and this gives such cards a wider circulation potential by simply changing the names of the communities on the cards.  In addition, post cards receiving this so-called “shot-gun” distribution method generally lack any caption on the reverse or message/address side of the cards.  Therefore these types of cards are not earmarked solely for sale in just one very specific place.  By doing this producers tried to get more bang for their buck so to speak.

For example, one such post card to consider in this category is the one showing a rolling-chair on the boardwalk.  It is highly doubtful that this image inscribed with “Stone Harbor, N.J.” is representative of Stone Harbor at all.  In fact I do not ever recall hearing about or seeing any photos of chair-pushers ever on the Stone Harbor boardwalk.  Assuredly, I can tell you that  the buildings in the background certainly are not indicative of the skyline or the structures that we have learned to associate with Stone Harbor.  The image could quite possibly have been snapped at Atlantic City but even that is not entirely clear.  What we do know is that the wheeled seats that Atlantic City popularized actually had been used at the Philadelphia Centennial celebration held in 1876.

The next two images have some basic similarities, made by the Chilton Company of Philadelphia, and depict “Children making a Splash in the Surf” and “Canoeing in the Surf.”  While both state “Stone Harbor, N.J.” in bold red letters, careful examination of the scene with youngsters in the foreground and the boardwalk in the background does reveal the two words “Atlantic City” which are barely visible in the lower right hand corner.  Both these divided-back post cards were sold and postmarked at Stone Harbor on August 21, 1912.

The scene captured showing the strong man lifting two women off the beach and holding them up in the air could have been taken anywhere that had ocean surf in the background.  Once more there is that added town designation of Stone Harbor, N.J. in red ink along with the somewhat comical phrase “Am gaining in strength daily.”

The next two images might even be on the verge of being somewhat risqué in that they show two women striking different poses on a beach.  Certainly these were without doubt attention-getting post cards.  Even though Stone Harbor, N.J. is indicated, it is most doubtful these bathing beauties attired in the Victorian swimwear were ever actually photographed on the beach at Stone Harbor.  Again this may have been yet another ploy to sell post cards that show women in perhaps provocative poses in swimming attire at the seashore.  The titles assigned to each image are in and of themselves somewhat suggestive and I will let it go at that!

The next post card shows two young children “Wading in the Waves by The Ocean Side” and also inscribed “Greetings from STONE HARBOR, N.J.” in the upper right border.  Again, a nice scene with the sun emerging from behind a bank of dark clouds out over the ocean, this scene most likely carried the name of many other different towns where they were placed on sale.

The next two more modern chrome post cards with divided sections showing two and four different beach scenes proclaim “Greetings from Stone Harbor, New Jersey” or “Greetings from Stone Harbor, N.J.”  With no captions on the reverse sides of these cards, it is entirely possible that these summery beach scenes could have been taken at any number of coastal  seashore towns.  Judging from the background on at least one such image, its is highly unlikely any of these images really depict Stone Harbor.  All the publisher Lusterchrome of Boston had to do was simply switch and change the name of the town and state to get broad distribution at any number of other places that were located along the ocean.  What do you think?

The next to last post card image shows a young lad and his dog standing at the edge of the water facing the ocean and the title reads “My Best Friend and I Going in for a Swim” as well as the name “Stone Harbor, N.J.”  Once more it is quite likely this particularly nice scene may or may not have taken place at Stone Harbor but rather someplace else.  Who knows?

Finally, our last post card image showing a combination of five smaller depictions of different inland, forested and mountainous scenes that do not even remotely come close to replicating or for that matter approximating what we know and think about Stone Harbor.  Yet there it is emblazoned in large letters at the top of the card: “Greetings from Stone Harbor, N.J.”  Even the more subtle or supportive action figures showing an archer, fly fishing, a diver, a golfer, a horse-back rider, and a tennis player do not really hit the nail on the head either although there was some golf and tennis being played at the Country Club on the mainland.  Once more someone really had no clue what Stone Harbor really was all about nor did they seem to know the geography and the lay of the land in South Jersey.  Do you agree?

So hopefully you have seen how on occasion some post card publishers have taken liberties and exercised a bit of artistic license so as to maximize their gains by producing certain images for use at different places.  Therefore one does not have to be a rocket scientist to determine which post cards are possibly suspect and not really showing actual scenes in Stone Harbor. 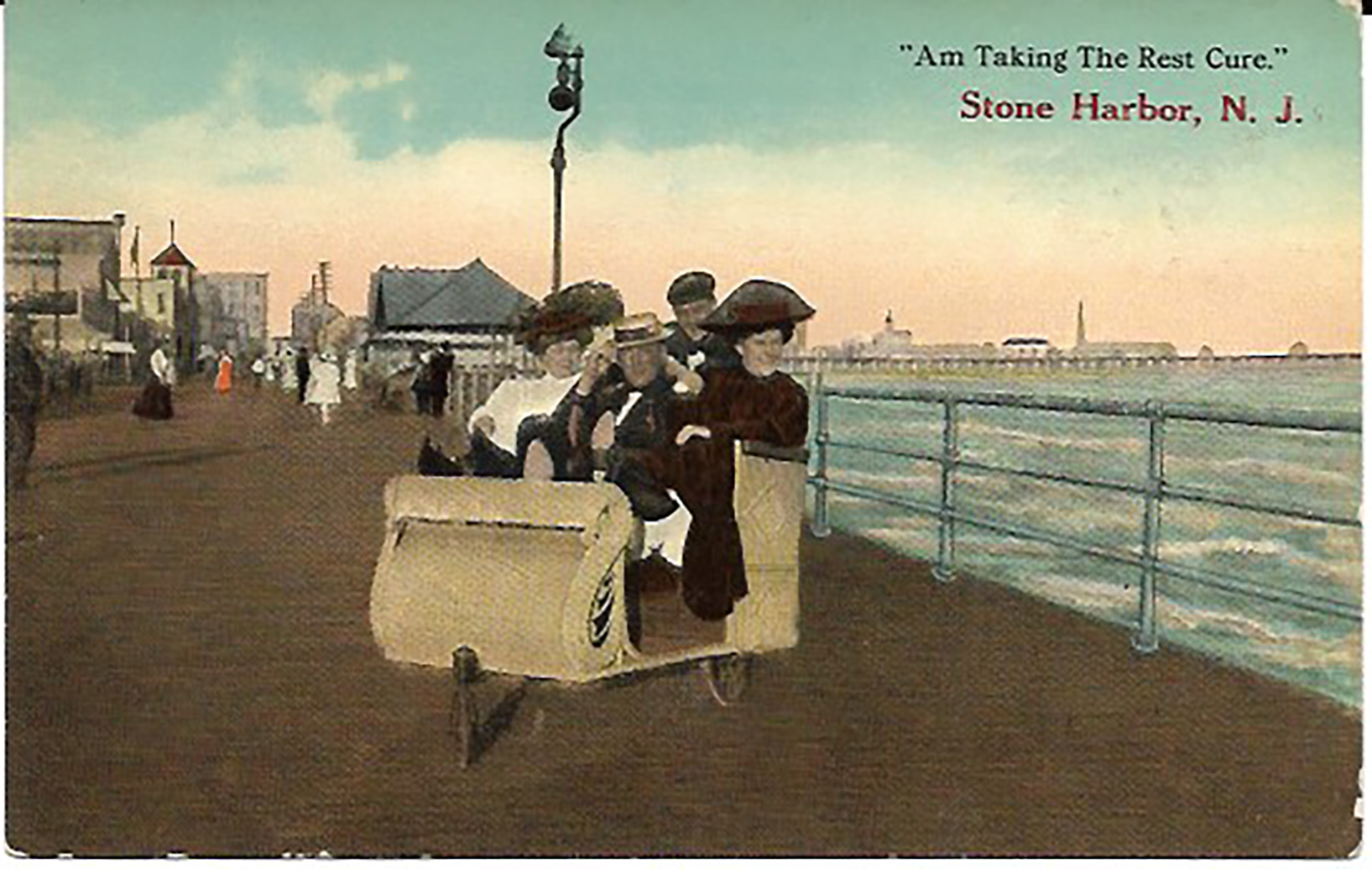 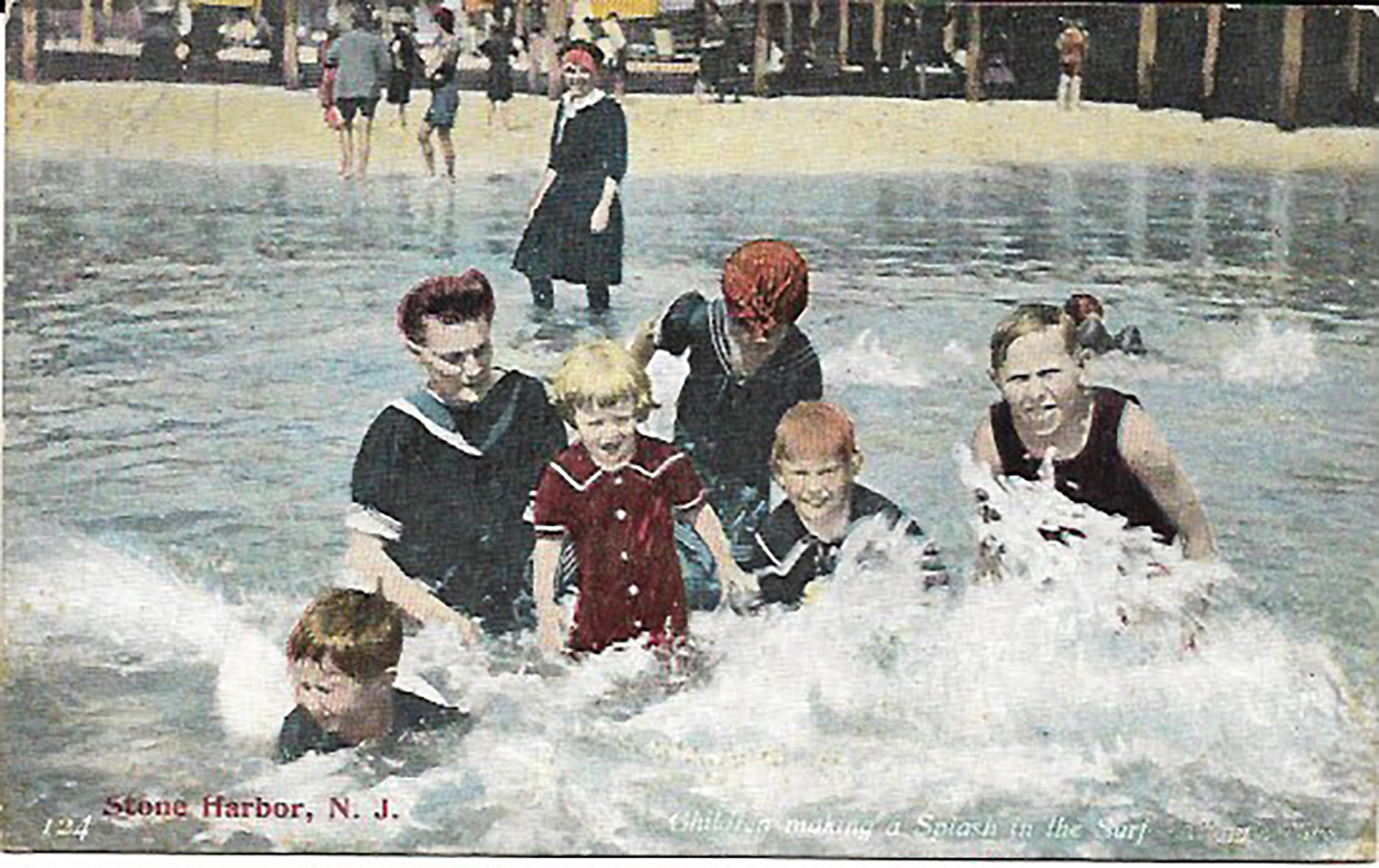 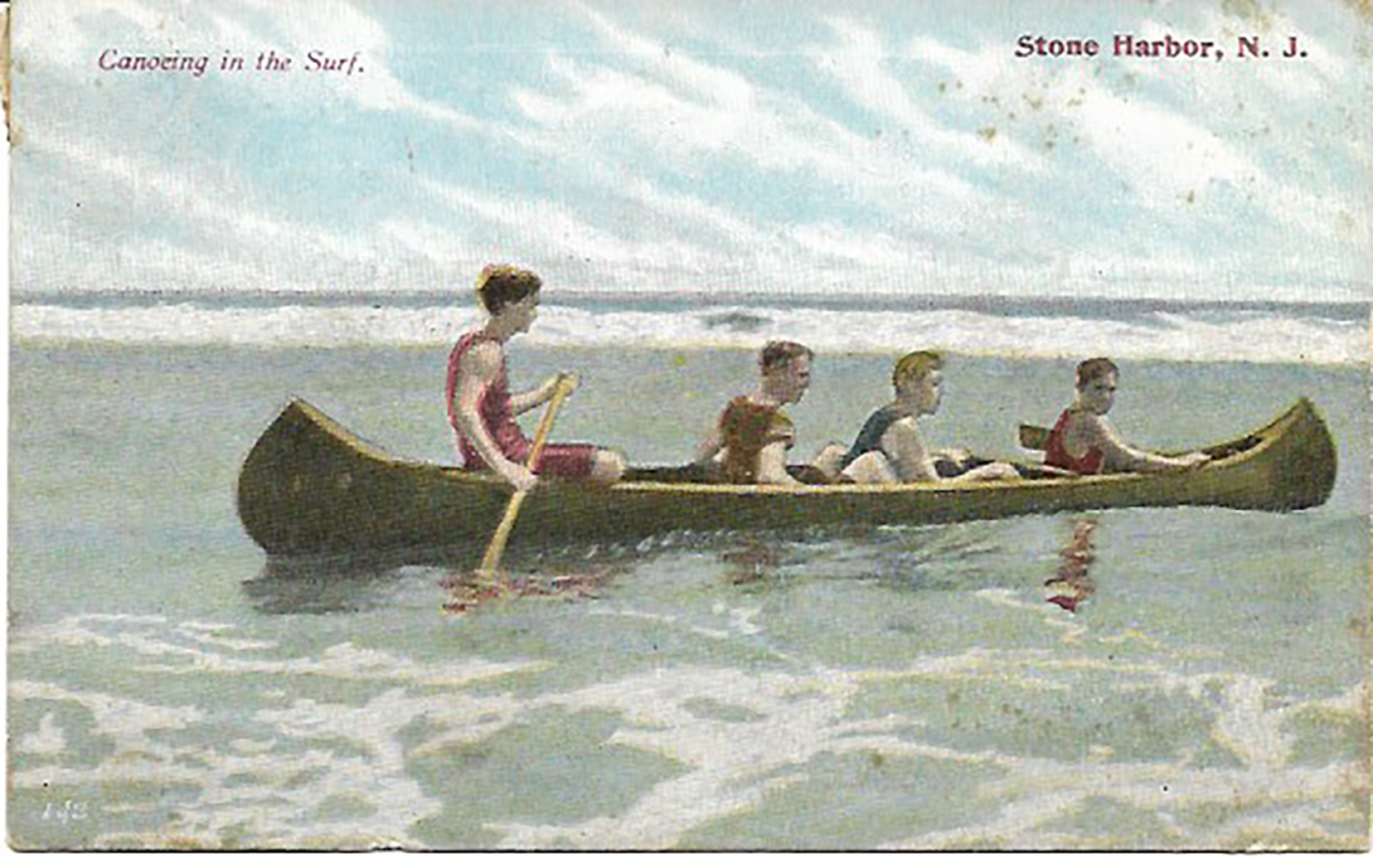 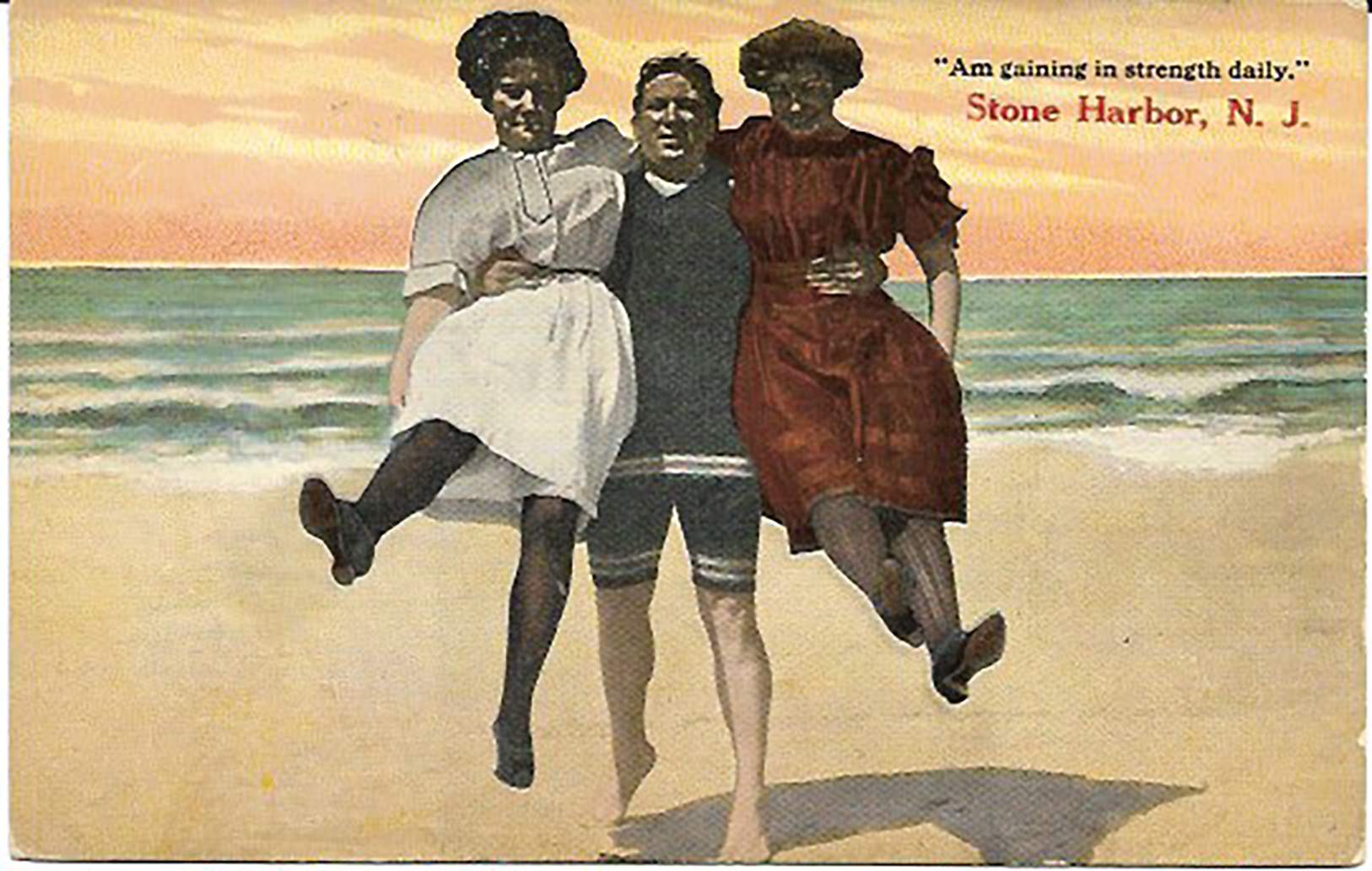 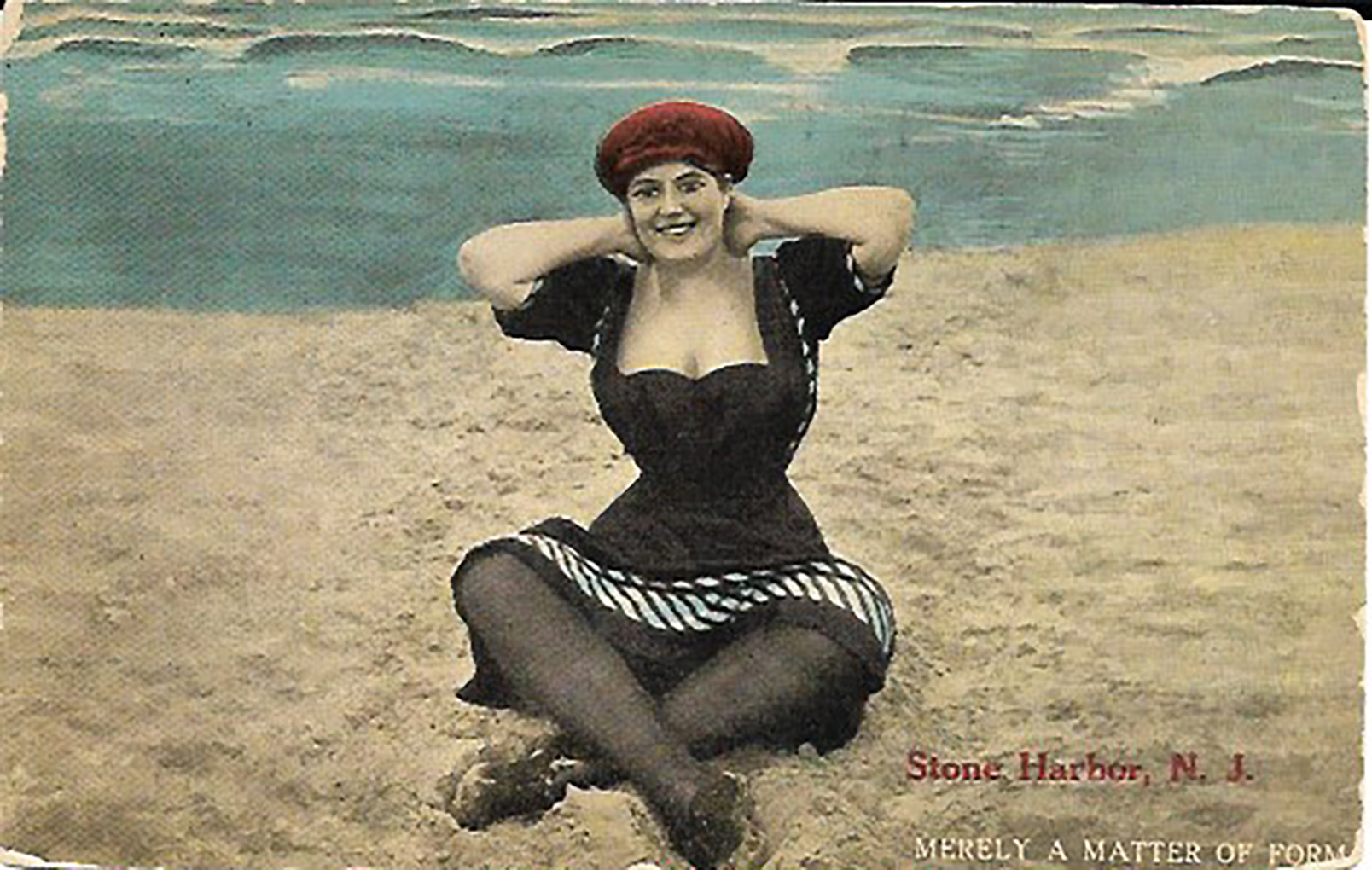 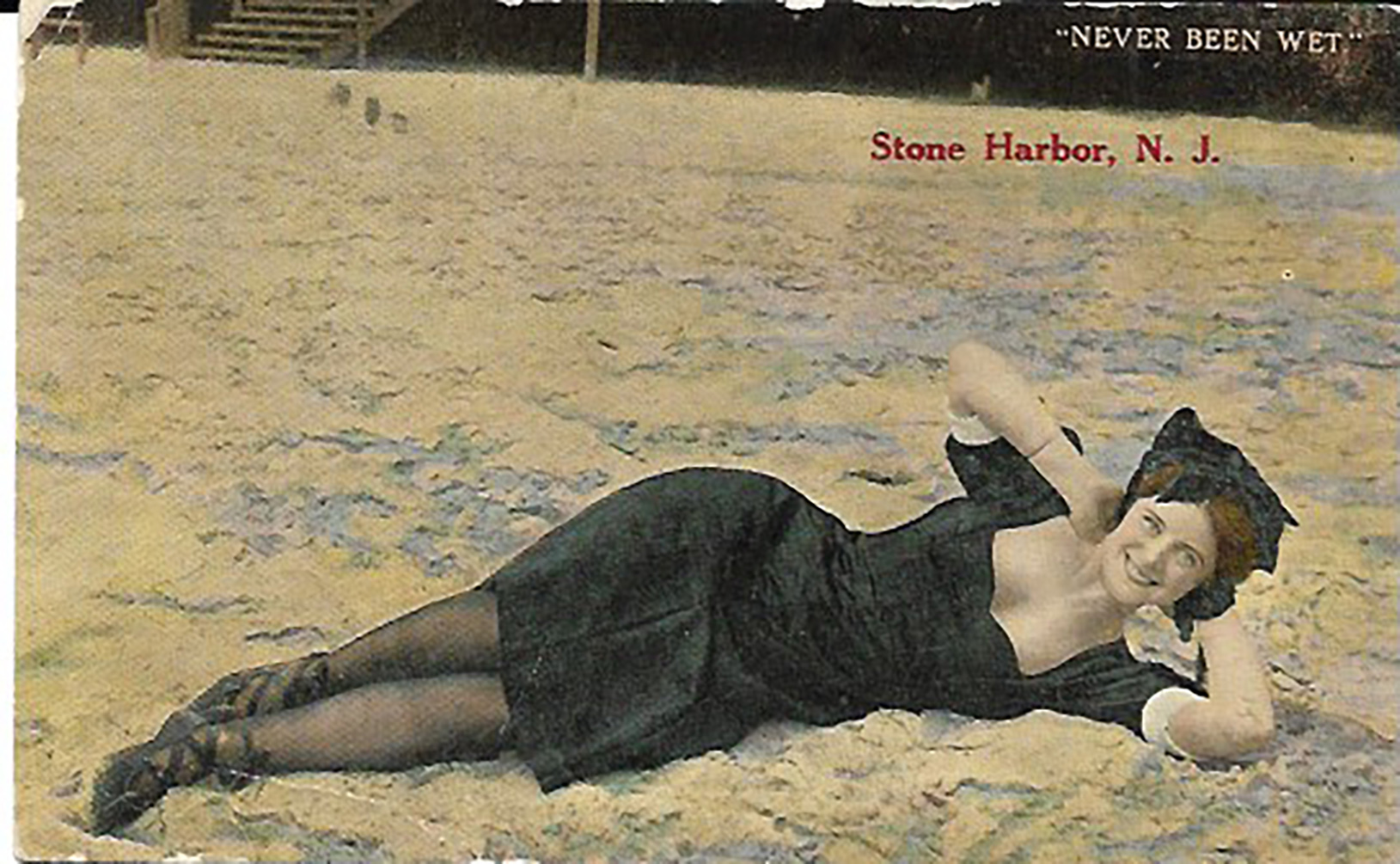 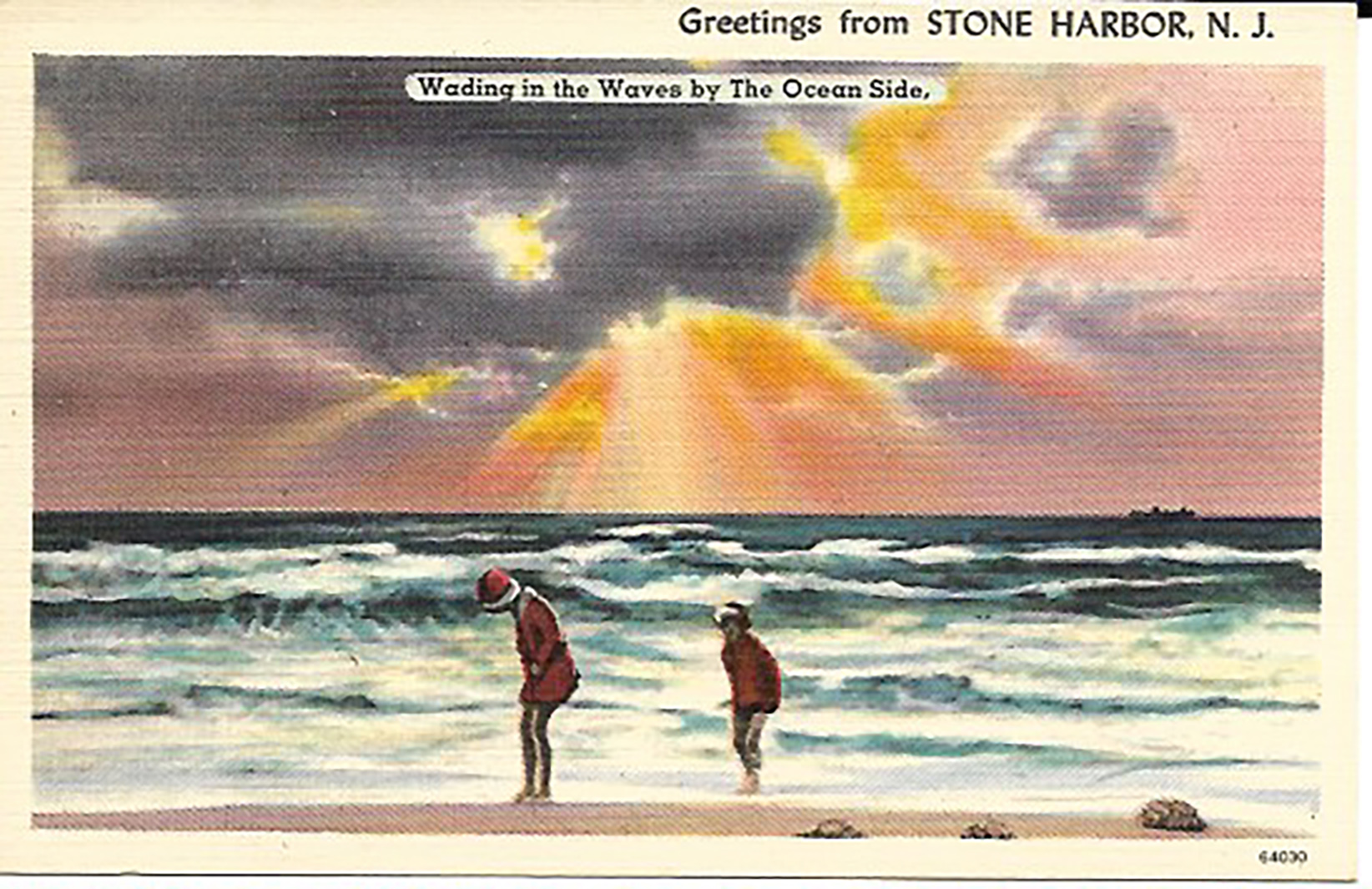 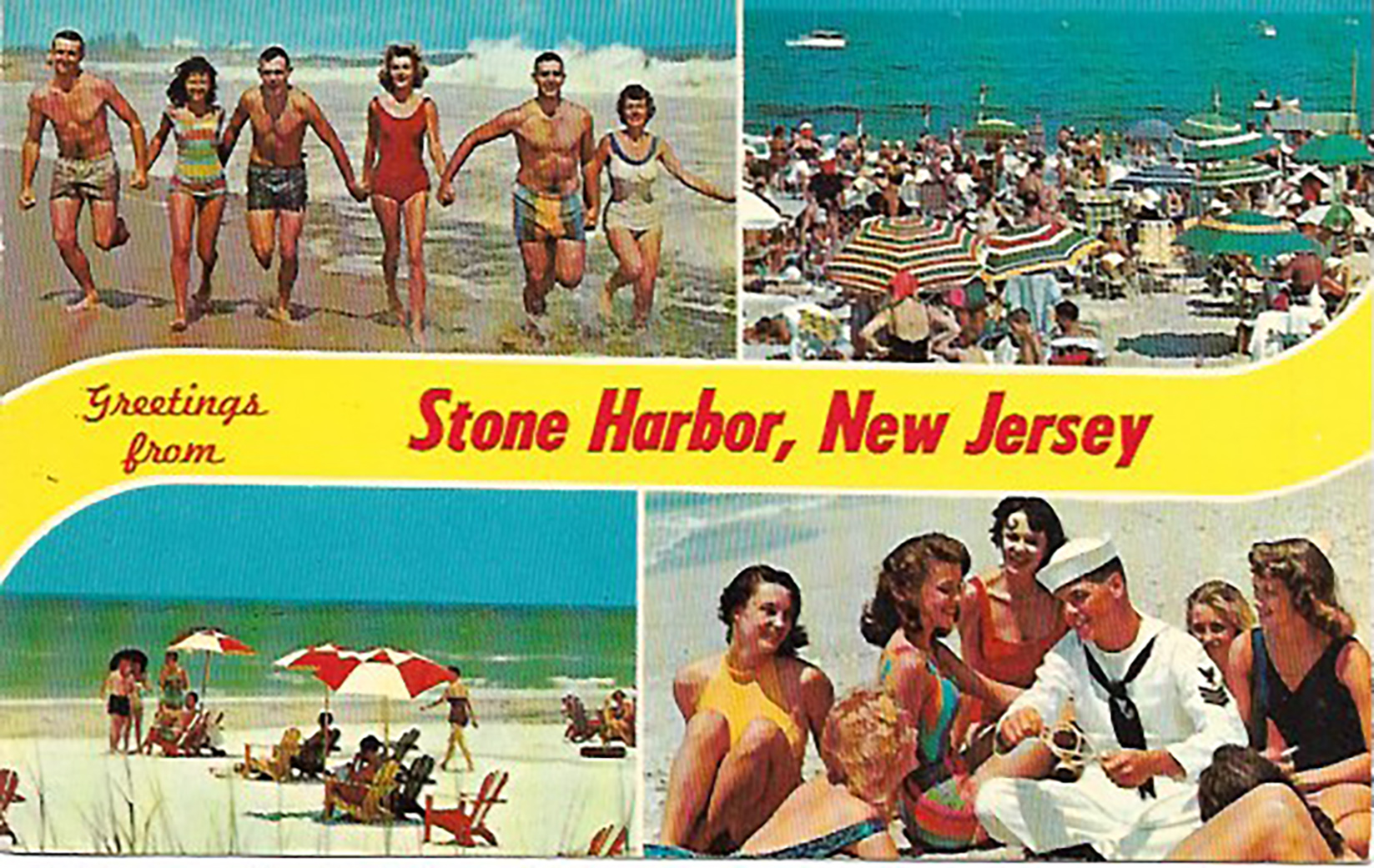 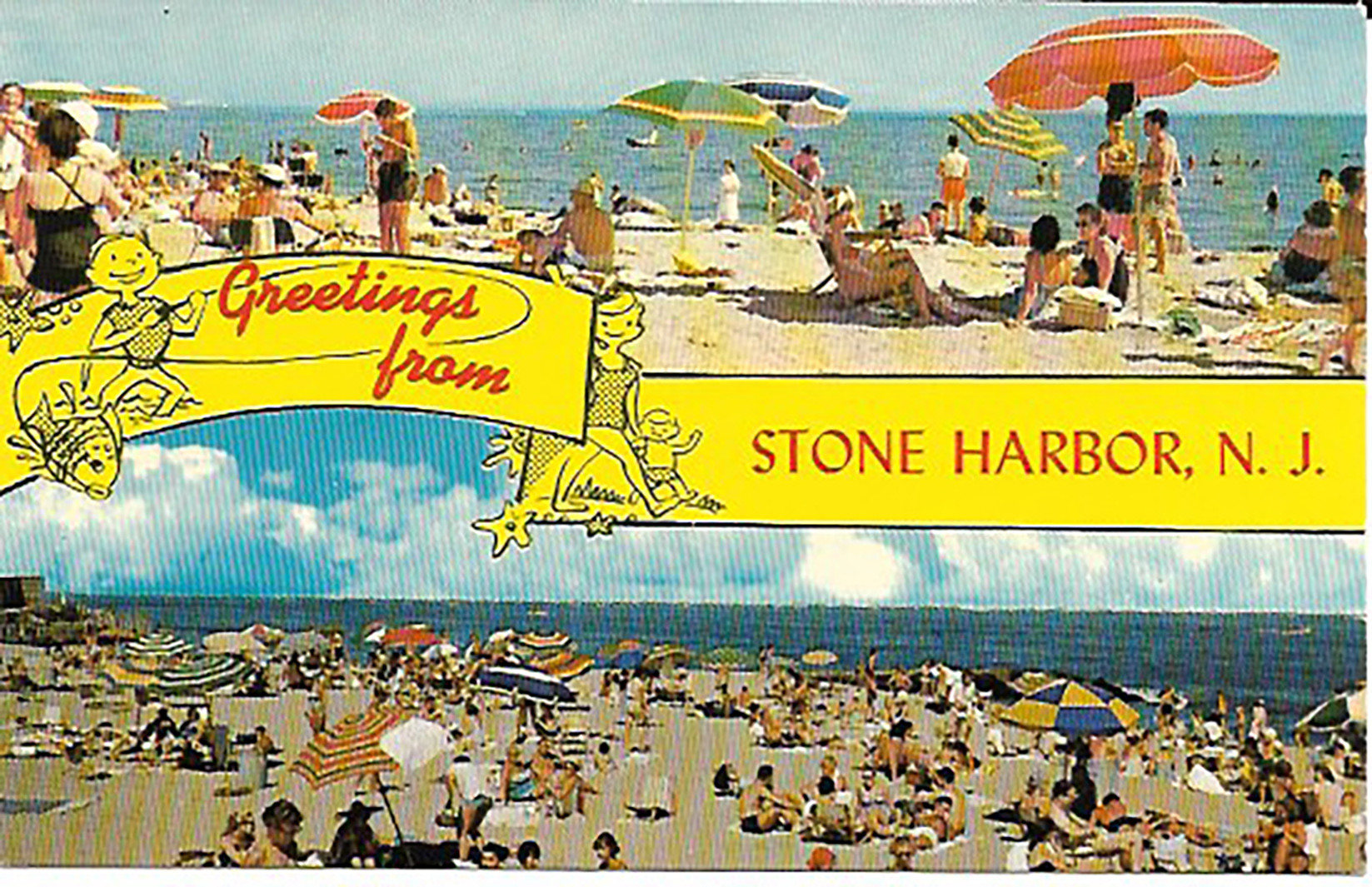 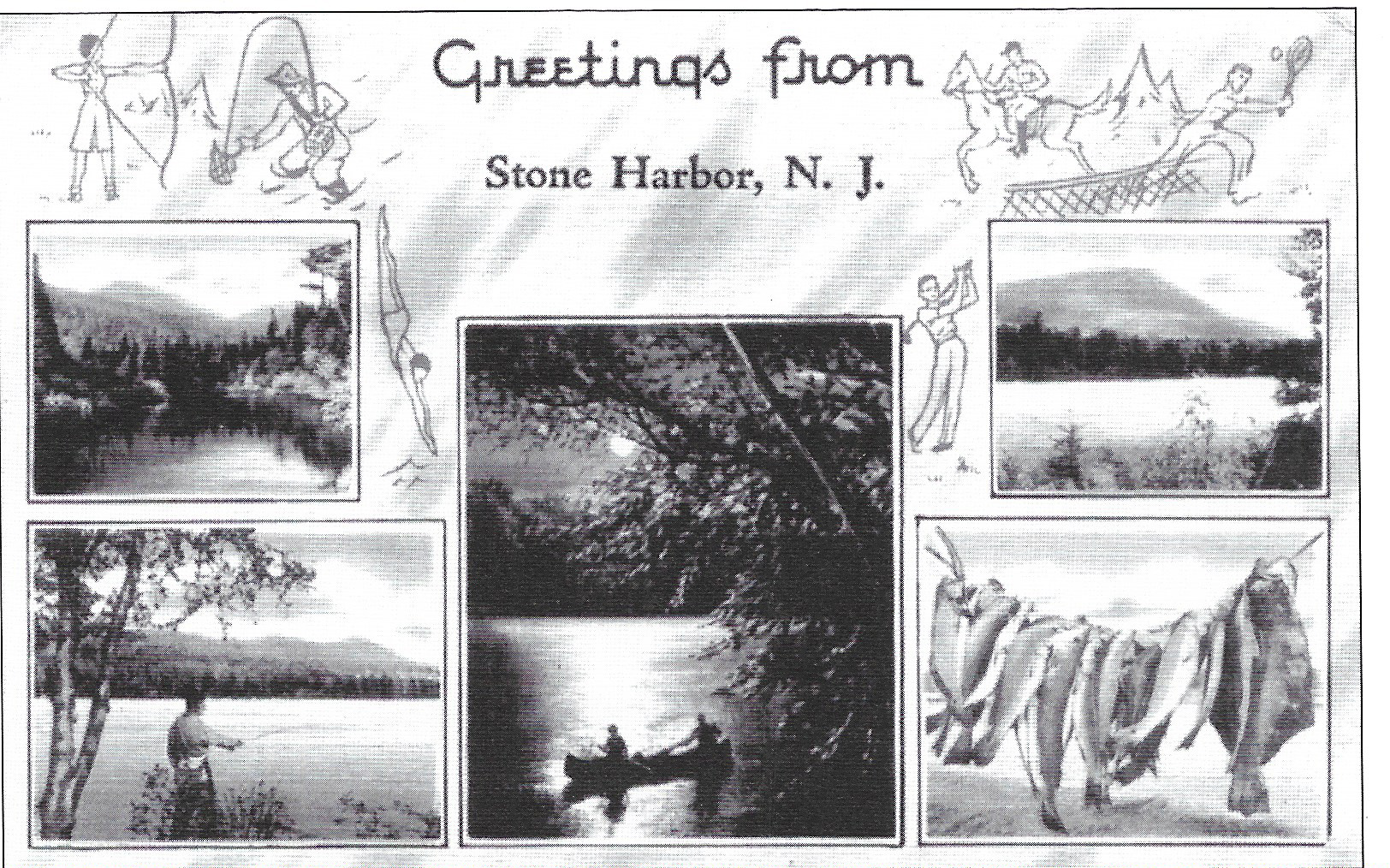