Born in 1888, Robert Althouse Sr. was a station agent for the Pennsylvania Railroad. He was the first in our family line to visit Stone Harbor. He and his wife Kathryn had their only child, Bob, in 1917. Robert would take his family to Stone Harbor for summer vacations during the 1920s. His employers had a railroad station at 85th street and also utilized the Reading Railroad station at 96th Street in Stone Harbor. Travel to Stone Harbor from Philadelphia by train was only 90 minutes back in 1911. Starting their vacation from Harrisburg and connecting in Philadelphia, made travel easy for Robert and his family. Robert would rent a small cabin and the family would fish and enjoy the beach. Often his wife’s brother would bring his family and join them. 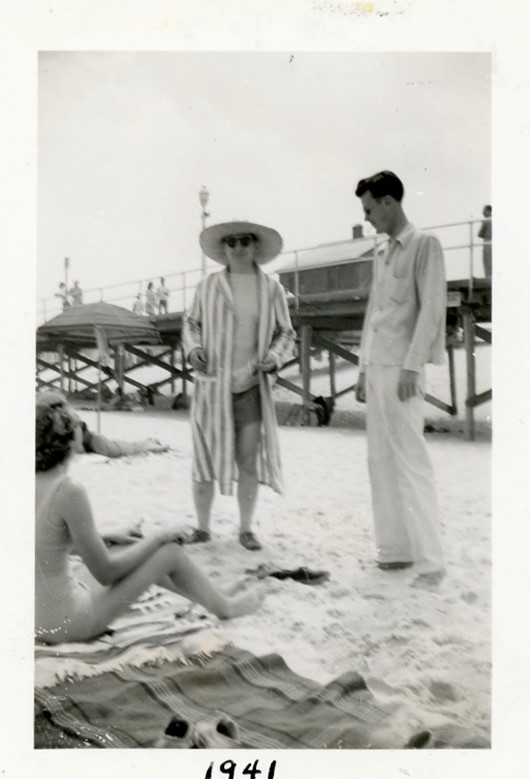 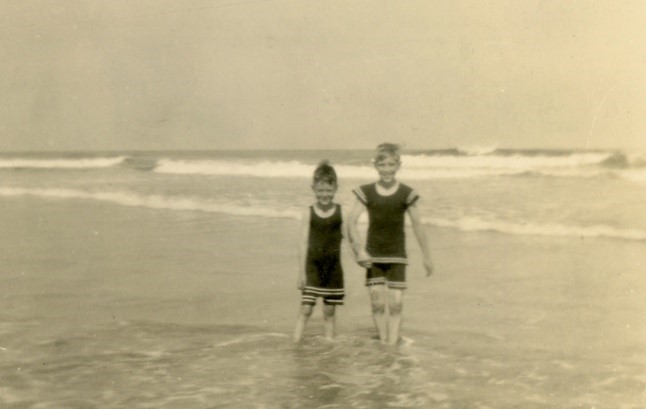 Bob loved going to Stone Harbor with his family and cousins on his summer vacations. He and his cousin Theo became close friends. Bob’s high school sweetheart was Jean Flickinger, only Jean didn’t know it! Bob was persistent and in 1940 they were married. Bob introduced Jean to Stone Harbor and she loved it. Later when asked about how she liked Bermuda, she immediately replied, “It’s nice but I’ll take Stone Harbor”.

The couple settled in Harrisburg, PA. They had their first child in 1942 and Bob was soon called to serve in WW II. Returning from the war, Bob enrolled at the University of Pennsylvania to obtain a masters in finance. In the 1950s, Bob and Jean began bringing their four children and Jean’s parents to Stone Harbor for vacations. 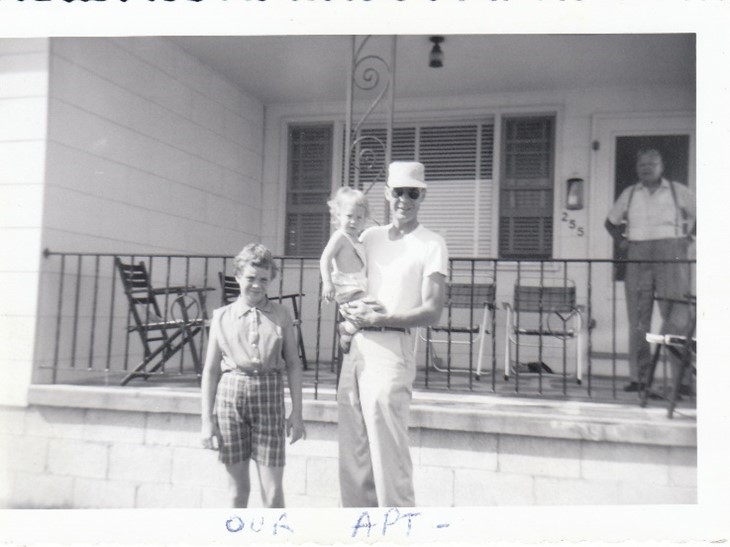 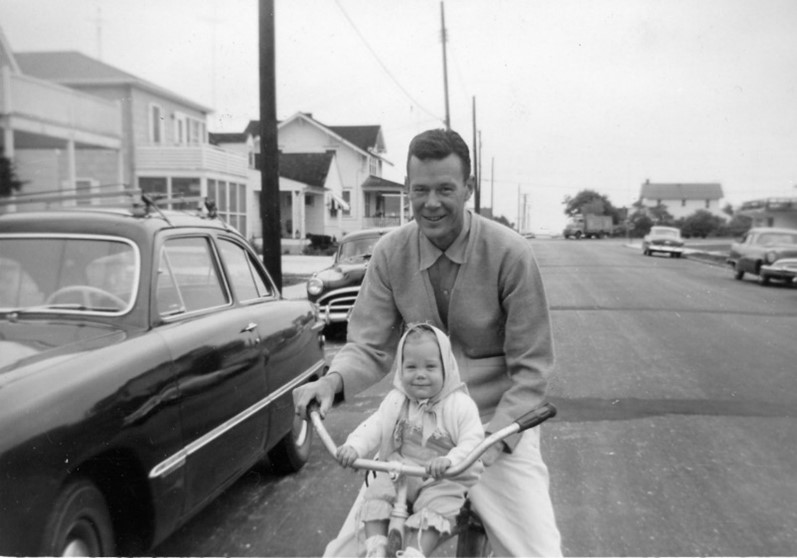 Bob worked at Jackson Manufacturing, rising through the ranks to become Secretary Treasurer. As an officer of the company, Bob was well compensated, but with four children money was tight at times. He loved Stone Harbor and decided to make an investment. In 1953, Bill Young, a local developer in Stone Harbor, built two identical homes for either rent or purchase at 255 and 257 89th Street. Bob rented the property at 255 89th several times and in 1960 signed a contract to purchase the home. Bob’s friends back in Harrisburg told him he was nuts owning two houses. Bob only utilized his Stone Harbor property for a couple weeks each summer and rented it the rest of the season. The rental income covered the mortgage with a little extra to spare. Bob would chuckle, “those same friends who told me I was crazy, now rent from me!” Some of those friends’ children would also rent the property and still do today – 60 some years later. Bob’s dream was that the property in Stone Harbor would be a place for his family to enjoy and come together from wherever they might be living. He kept the property available for family every 4th of July week. His dream came true as his four children and their children would love Stone Harbor and become closer as a result. Over time he would come to be known as Grandpa and Jean, Grandma, by their children’s spouses and their grandchildren. 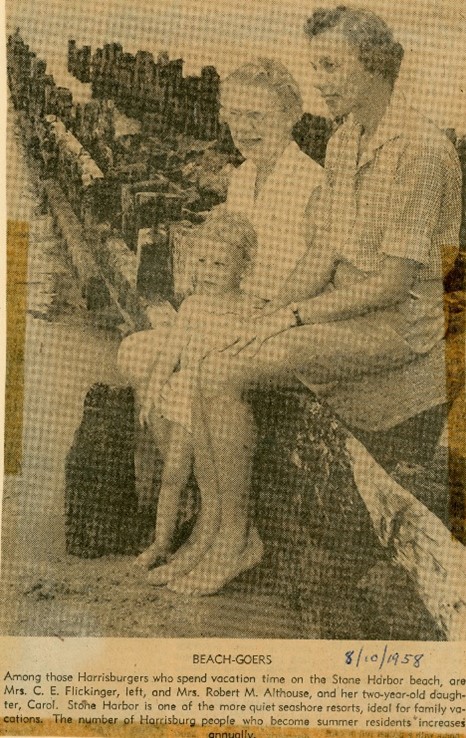 Three Generations at Stone Harbor: Jean, her mother and Carol 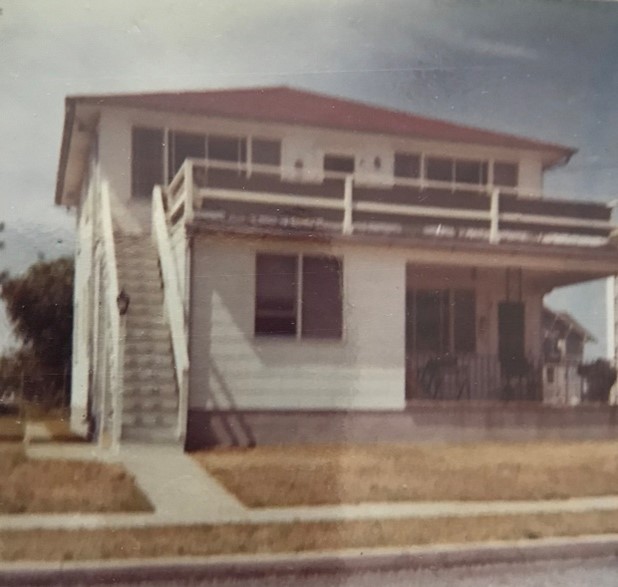 Most 4th of July holidays a family picture would be taken in front of the house. The week of July 4th, Bob and his family would enjoy all Stone Harbor had to offer. A normal schedule would be to head to the beach with the kids in the morning, come back to the house for subs at lunch (occasionally Pat’s Cheesesteaks), and then back to the 88th street beach where the kids could play or sleep under the pavilion to avoid the sun. After washing the beach off and having dinner together, it was time to walk to 96th to shop, play miniature golf, or Springers for ice cream. One evening the family would go to the recreation field by the Stone Harbor recreation center and play a game of softball. Once the kids were in bed, the adults would often play cards (e.g., Blitz) or venture back to 96th to enjoy the Chatter Band at Fred’s, the Shelter Haven, or music at Henny’s. Bands at the Windrift Hotel were a favorite dancing spot. 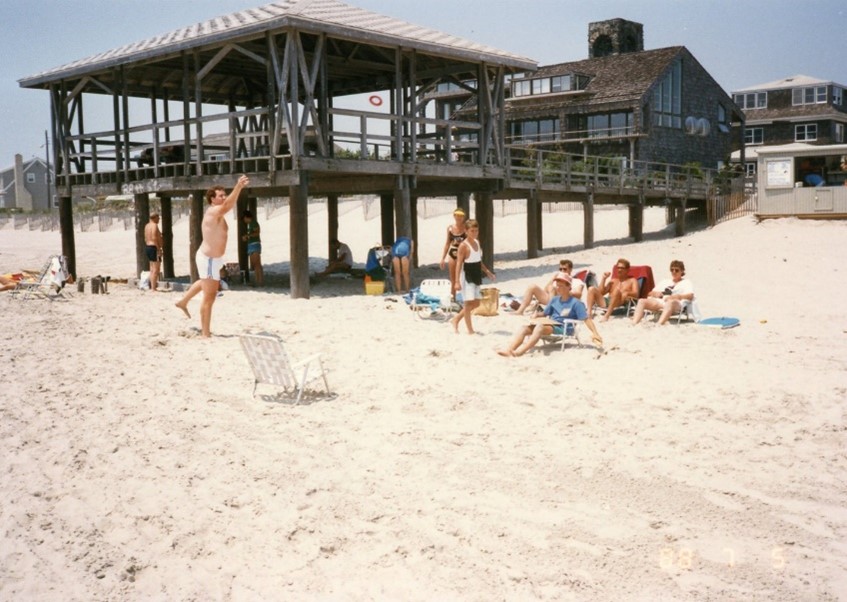 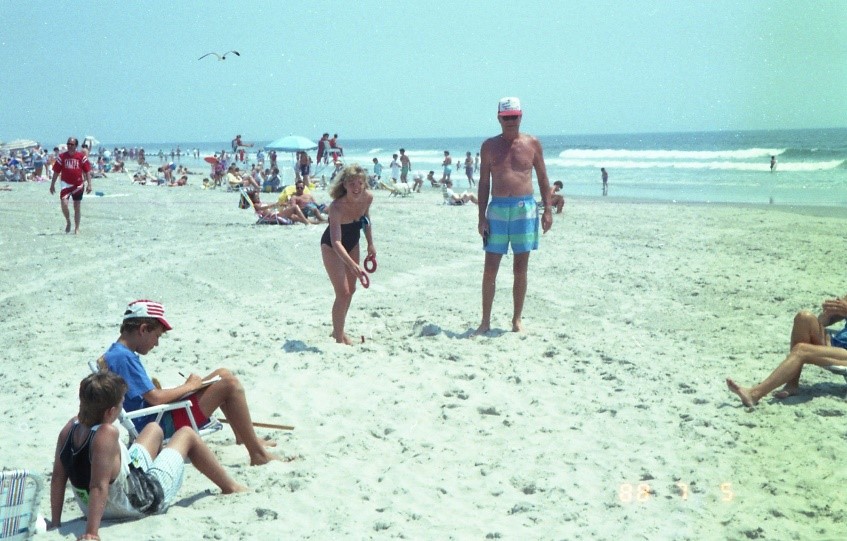 The family also participated in the July 4th events at the Stone Harbor. The kids enjoyed the candy scramble and slow bike race. Bob’s youngest daughter, Carol, had the distinction of winning the 100 yard dash when she was 18 and again when she was 45. Carol’s oldest children, Robert and Erin, would participate and do well in the Philly’s Home Run Derby, only to be booed by the crowd as they came to get their award and it was announced they were from Dallas, Texas. It was a little disturbing for a 10 year old, but Eagle fans never change. At night, Bob’s granddaughter, Maggie Joyce, being born on July 4th it made for a dual celebration. 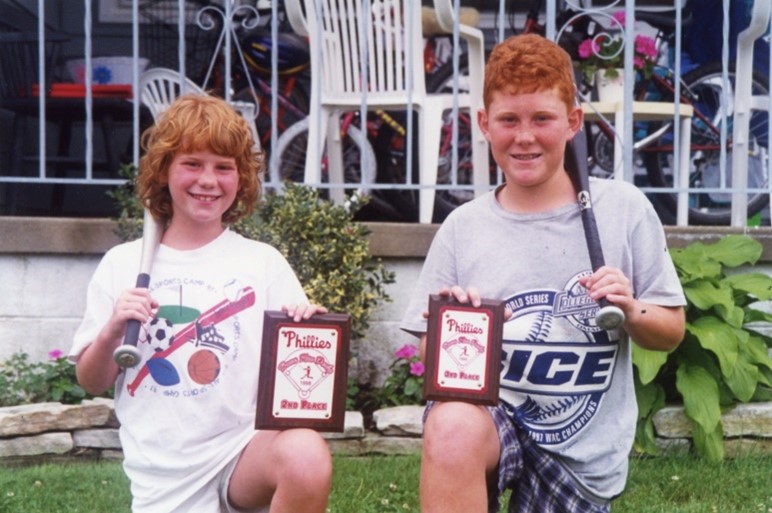 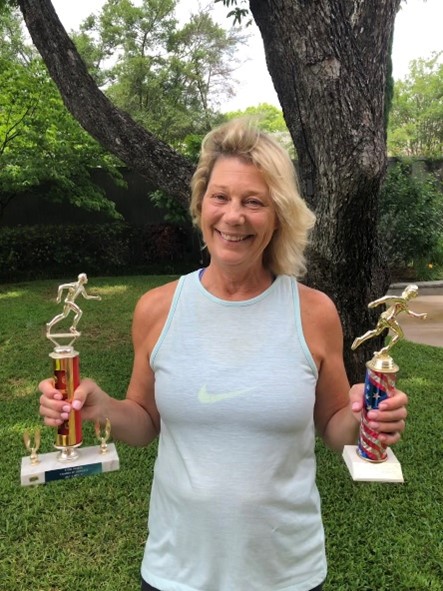 In the first twenty years Bob owned the house, he and Jean made few changes besides furniture and required maintenance. He retired from Jackson Manufacturing in 1979 and decided he and Jean were going to spend more time at Stone Harbor. They had many friends in Stone Harbor especially living on 89th Street (e.g., Naumann’s lived next door and the DeAngelis’ lived next to them), who they enjoyed playing Bridge with over the years.

The original house had no appliances, carpet, washer/dryers, or 2nd floor heat. Every year a vacation day was spent at the laundromat in Cape May Courthouse. His first step was to add a dishwasher, disposal, washer and dryer to the first floor. The next project was to add carpet in the living room, a new furnace, and blue aluminum siding to the house. In 1980 he added a wooden back deck. Previously the home only had steps from the kitchen to the back yard. The back deck became family a place to gather after a day at the beach and have meals, if there wasn’t a land breeze bringing green heads. The following year he replaced all the windows with storm windows. Three years later he added a 2nd floor dishwasher and disposal, as well as replacing the 2nd floor balcony roof, deck, and railings. Those projects cost Bob about $20k between 1979 and 1983 (over $55k in 2021 dollars). 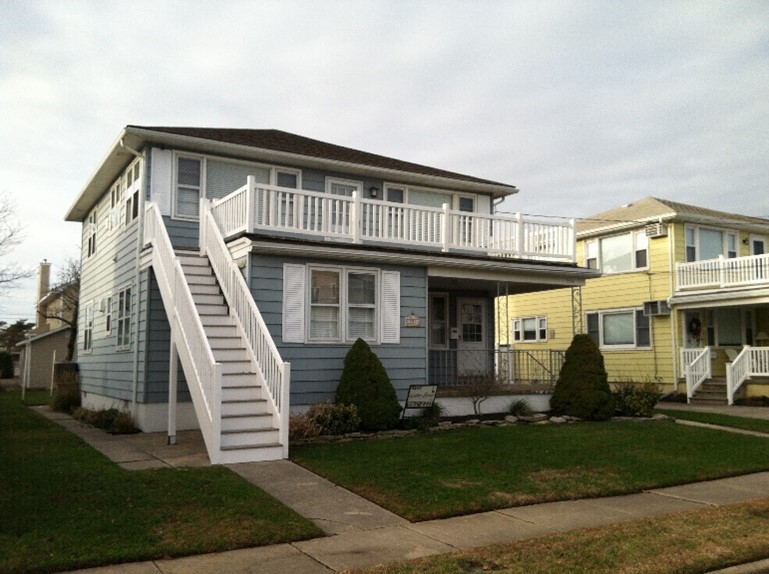 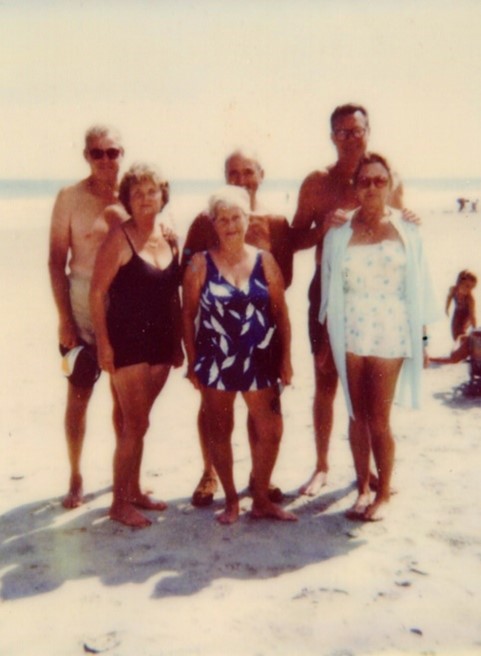 Bob added the first televisions in the living rooms on both floors in 1985. He never wanted everyone sitting silently in front of TV, so at first it was not used very much. A very good baseball player in his younger days, Bob did enjoy watching the Phillies play. In the fall he also enjoyed watching the Washington Redskins play, especially the years they were better known as the “over the hill gang” under Coach George Allen.

Bob passed away in March 1997. He had arranged for the Stone Harbor house to be put in a trust, with his four children as joint trustees. His three daughters primarily managed the property going forward, as their brother did not use it. Other than adding central air conditioning for each floor, WIFI, a second floor washer and dryer, replacing cast iron pipes, and getting rid of the phone line, they made as few changes as possible. The annual property upkeep basically broke even with the rental income. Bob’s family continued to enjoy July 4th gatherings. 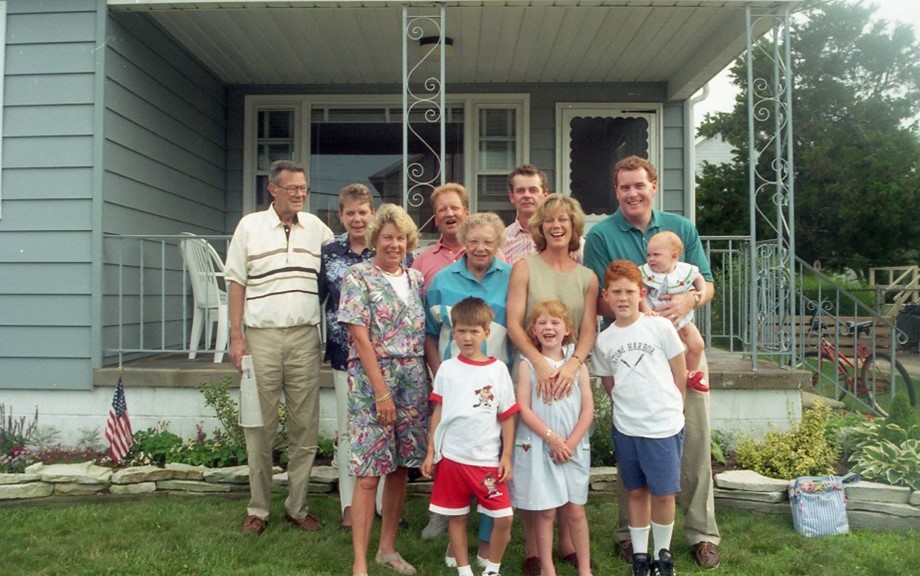 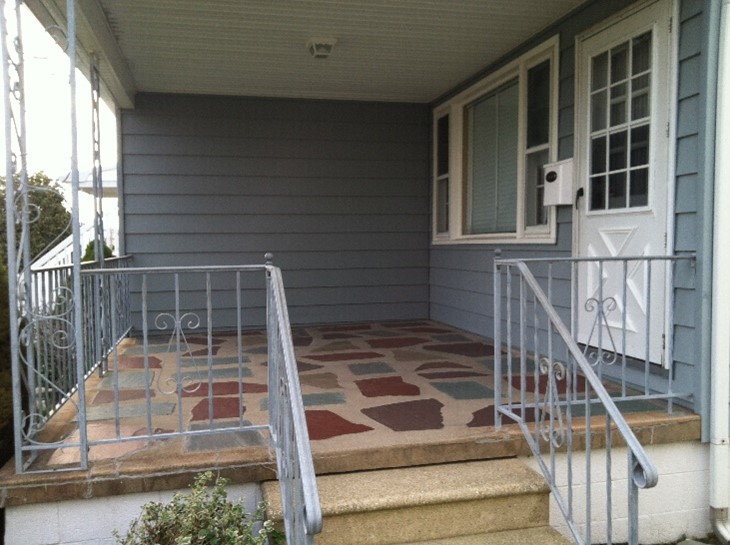 Grandpa was missed by everyone, but the July 4th family tradition continued each year. There was always something new, yet familiar about Stone Harbor each year. What has never changed is how much everyone wants to be there and enjoy the beautiful beach, tasteful downtown, manicured lawns, unique and historic houses, wide boulevards, and friendly people which make up Stone Harbor. 255 89th Street will continue to be a family tradition for hopefully generations to come. 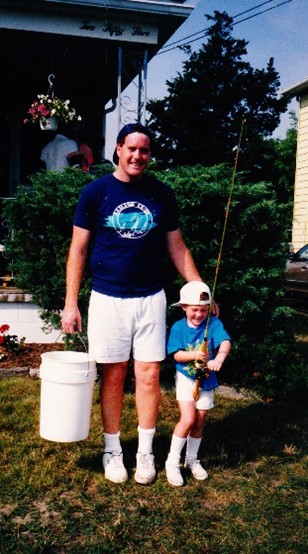 Leaving to fish in bay

Jean passed away in 2006. A little over a year later, Bob and Jean’s son asked his three siblings to purchase his interest. He lived in Arizona and was not able to use the property. He suggested selling the house and using the proceeds to rent, but the three sisters did not want to sell and lose the house which held so many memories.

In late 2007, the youngest daughter, Carol, and her husband John offered to purchase the property interests from her three siblings. Their offer was to purchase the property, continue the July 4th tradition, and enable family to use the property if it was not rented – all better known as “Grandpa’s Rules”. July of 2008, transfer of ownership for 255 89th Street was finalized to Carol and John Joyce. Carol and John made many significant changes to the property over the years, but have always kept the historic look and feel of Grandpa’s and Grandma’s home. The knotty pine walls in the living areas kept the family memories in place. In 2015 all new siding was added, a new enlarged back deck and pergola added (which keeps the seagulls away), two new shower stalls and foot sprayers added, new landscaping in the front and back added, the house was raised, and the 1 st and 2nd floor back bedrooms were enlarged to the size of true master bedrooms, each with a large walk-in closet and large bathroom. Having a second bathroom on each floor was exciting for everyone. A variance for the addition was granted by the Borough with the agreement that Carol and John also add two driveways in order to have more off-street parking on 89th Street. 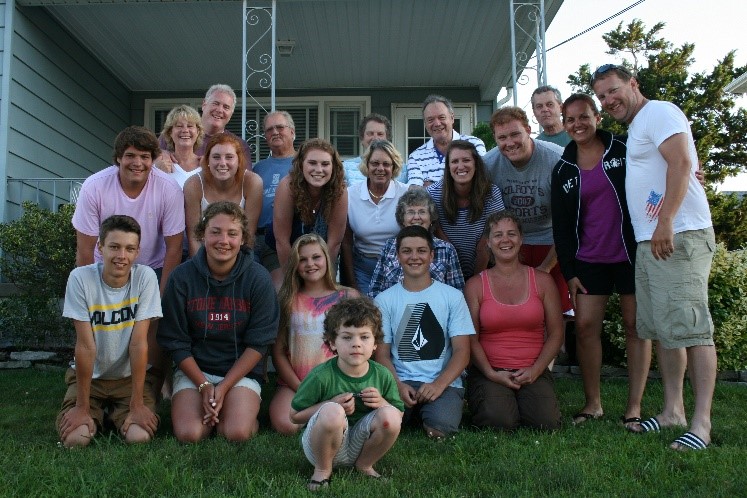 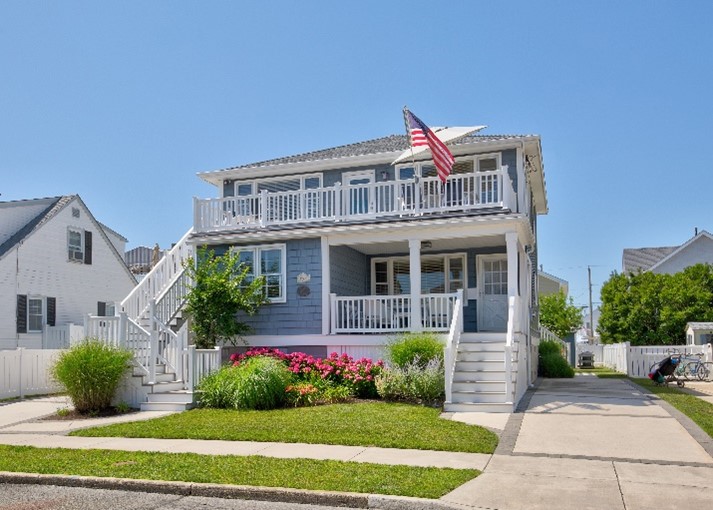 A few years later, Carol and John replaced the 1950s ceiling tiles with sheetrock. The wooden second floor balcony was replaced and the railing updated. They also updated both kitchens with new appliances, washers and dryers, countertops, backsplash, and flooring. The old linoleum floors and yellow Formica countertops were now gone, but the knotty pine cabinets and walls remained. Grandpa’s Rules also include no smoking in the house, washing the sand off your feet and body before entering the house, and eating is only allowed in the kitchen or deck. His rules were meant to keep the family together, have conversations vs watching TV, and keep the place clean. Every now and then, there is a complaint about something, but we all respect Grandpa’s Rules. It is a way for his legacy to live on.